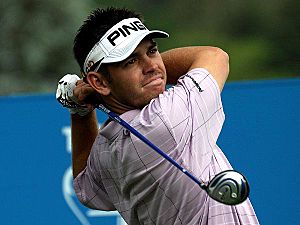 Oosthuizen at the 2008 Telkom PGA Championship

Lodewicus Theodorus "Louis" Oosthuizen (born October 19, 1982) is a PGA Tour golfer. He is from South Africa. He is currently leading the Deutsche Bank championship. He won the 2010 Open Championship and was runner-up in the 2012 Masters Tournament.

He won many amateur titles before turning professional in 2002 at the age of 19. In March 2010, he won his first European Tour event at the Open de Andalucia de Golf. He also won the 2010 Masters Par 3 Contest.

All content from Kiddle encyclopedia articles (including the article images and facts) can be freely used under Attribution-ShareAlike license, unless stated otherwise. Cite this article:
Louis Oosthuizen Facts for Kids. Kiddle Encyclopedia.