Louise McKinney (née Crummy; 22 September 1868 – 10 July 1931) was a Canadian politician and women's rights activist from Alberta, Canada. She was the first woman sworn into the Legislative Assembly of Alberta and the first woman elected to a legislature in the British Empire. She served in the Alberta legislature from 1917 to 1921 as a member of the Non-Partisan League. Later she was one of the Famous Five who campaigned successfully for the right of Canadian women to be appointed to the Senate. A former schoolteacher and temperance organizer, she came to Alberta in 1903 as a homesteader. 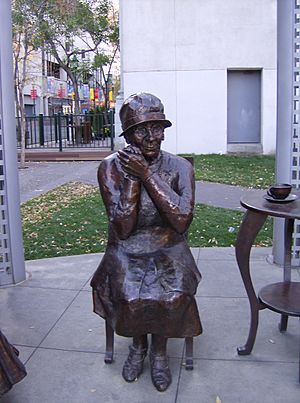 McKinney ran for a seat to the Alberta Legislature in the 1917 Alberta general election. She won the electoral district of Claresholm as a candidate for the Non-Partisan League by defeating Liberal incumbent William Moffat. She was one of two women elected to the Legislative Assembly that year, the other being Roberta MacAdams.

McKinney spoke out in favour of temperance, education, stronger liquor control, government ownership of grain elevators and flour mills, women's property rights and adoption of, and reform to, the Dower Act.

She ran for a second term in the 1921 Alberta general election as a member of the United Farmers. She was defeated by Independent Farmer candidate Thomas Milnes.

McKinney was one of The Famous Five, along with Irene Parlby, Henrietta Muir Edwards, Emily Murphy and Nellie McClung

McKinney died at Claresholm, Alberta, in 1931, just two years after the Persons Case victory. In 1939, she was recognized as a Person of National Historic Significance by the government of Canada. A plaque commemorating this is on display at the post office in Claresholm. The Persons Case was recognized as a Historic Event in 1997. In October 2009, the Senate voted to name McKinney and the other members of the Famous Five Canada's first "honorary senators".

All content from Kiddle encyclopedia articles (including the article images and facts) can be freely used under Attribution-ShareAlike license, unless stated otherwise. Cite this article:
Louise McKinney Facts for Kids. Kiddle Encyclopedia.