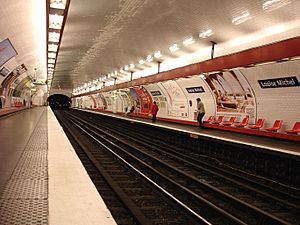 Louise Michel is a station of the Paris Métro, serving Line 3. It is located in the commune of Levallois-Perret northwest of the French capital, Paris.

Before 1946, this station was named Vallier after a mountain (2839m)in the Pyrenees near the Val d'Aran.

The station was renamed on May 1, 1946 to Louise Michel, in honour of the French anarchist and communarde.

All content from Kiddle encyclopedia articles (including the article images and facts) can be freely used under Attribution-ShareAlike license, unless stated otherwise. Cite this article:
Louise Michel (Paris Metro) Facts for Kids. Kiddle Encyclopedia.