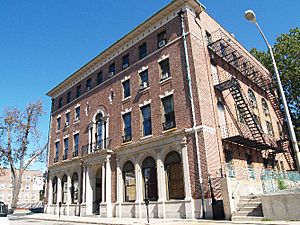 The area of Fall River's Lower Highlands has a settlement history dating to the area's prehistory, when the banks of the Quequechan River were settled by Wampanoag Native Americans. The city's major thoroughfare were laid out by English colonists in the 18th century. The Lower Highlands area was by the late 18th century the site of grist, saw, and fulling mills, with a small community of residences clustered nearby. The first of the city's large textile mills was built on the Quequechan River in 1813. North Main Street and Bedford Street became commercial areas, and the area to their northeast developed as a residential district. A substantial portion of the area was devastated by fire in 1843, but was soon rebuilt. Little development has taken place since the early 20th century, when the city's economy began a long decline.

The Lower Highlands district consists of about 212 acres (86 ha), roughly bounded by Cherry, Main, Winter, and Bank Streets. Most of its more than 100 buildings are residential in character, with the oldest dating to 1810. A modest number of houses survive that are Federal in style, and there are a significant number of houses with at least vernacular Greek Revival elements. Much of the construction in the second half of the 19th century was vernacular multiunit housing for workers, sometimes with modest vernacular stylistic elements popular at the time of construction. Prominent non-residential buildings include the 1875 Gothic Revival Church of the Ascension, and the Cataract Engine Company No. 3, built in 1843 after the great fire.

All content from Kiddle encyclopedia articles (including the article images and facts) can be freely used under Attribution-ShareAlike license, unless stated otherwise. Cite this article:
Lower Highlands Historic District Facts for Kids. Kiddle Encyclopedia.