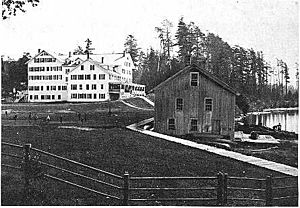 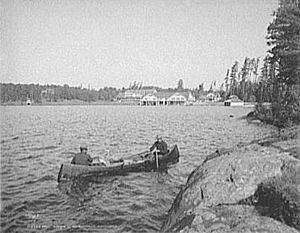 350-acre (1.4 km2) Lower St. Regis Lake is a part of the St. Regis River in the Adirondacks in northern New York State. At its northern edge is Paul Smith's College, former site of Paul Smith's Hotel. Along with Upper St. Regis Lake and Spitfire Lake, it became famous in the late 19th century as a summer playground of America's power elite, drawn to the area by its scenic beauty and by the rustic charms of Paul Smith's Hotel. It is the site of a small chapel, originally built of logs, St. John's in the Wilderness, that was formerly attended by well-dressed families that arrived in canoes, rowboats and sailboats.

Paul Smith's College maintains several lean-tos on the lake. The college is the start of two famous canoe routes—the Seven Carries and the Nine Carries.

The lake lies in the town of Brighton.

All content from Kiddle encyclopedia articles (including the article images and facts) can be freely used under Attribution-ShareAlike license, unless stated otherwise. Cite this article:
Lower St. Regis Lake Facts for Kids. Kiddle Encyclopedia.