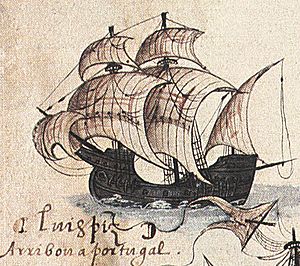 Luís Pires (15th century/16th century) was a Portuguese explorer who accompanied Pedro Álvares Cabral in the discovery of Brazil, being one of the captains of the fleet. On leaving the Cape Verde Islands, Pires was forced by a storm to return to Lisbon, never having reached Brazil or India (the initial and official destination of the journey).

All content from Kiddle encyclopedia articles (including the article images and facts) can be freely used under Attribution-ShareAlike license, unless stated otherwise. Cite this article:
Luís Pires Facts for Kids. Kiddle Encyclopedia.