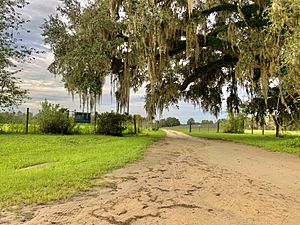 Lubee Bat Conservancy is an Association of Zoos and Aquariums-certified institution in Gainesville, Florida. Its focus is the research and conservation of bats, particularly megabats.

The Bacardi family and business had a special interest in bats, as bats were the inspiration for its logo. When Luis Bacardi died on 12 September 1991, the Lubee Foundation shifted emphasis to focus on bats, rehoming its non-bat species.

Lubee Bat Conservancy is situated on a 110 acres (45 ha) ranch, approximately 10 mi (16 km) north of the city of Gainesville, Florida. It has facilities designed for the maintenance of captive bats, with temperature-controlled areas for roosting and outdoor flight enclosures. It also has medical equipment to manage the bats' needs, such as an examination room equipped for anesthesia, isolation areas, and a recovery room.

Lubee Bat Conservancy is home to more than 200 megabats of several species. Megabat species housed at Lubee include:

With the dissolution of the Organization for Bat Conservation (OBC) in early 2018, Lubee announced that they would take on 17 of OBC's bats, including two species of microbat:

All content from Kiddle encyclopedia articles (including the article images and facts) can be freely used under Attribution-ShareAlike license, unless stated otherwise. Cite this article:
Lubee Bat Conservancy Facts for Kids. Kiddle Encyclopedia.