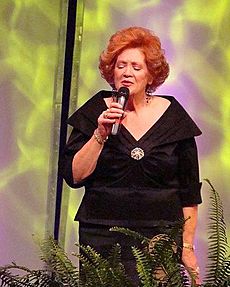 Lulu Roman (or Bertha Louise Hable; born 6 May 1946) is an American comedian and singer. She acted in the television comedy Hee Haw. She sings mostly gospel music. In 1984, Roman received a Dove Award from the Gospel Music Association for her album You were Loving Me. In 2003 she was the author of a book titled Kitchen Komforts.

Roman was born in Dallas, Texas.

All content from Kiddle encyclopedia articles (including the article images and facts) can be freely used under Attribution-ShareAlike license, unless stated otherwise. Cite this article:
Lulu Roman Facts for Kids. Kiddle Encyclopedia.