Pilot Point is a city in Denton County, Texas, United States. The population was 3,856 at the 2010 census.

According to the United States Census Bureau, the city has a total area of 3.4 square miles (8.7 km2), all of it land.

The climate in this area is characterized by hot, humid summers and generally mild to cool winters. According to the Köppen Climate Classification system, Pilot Point has a humid subtropical climate, abbreviated "Cfa" on climate maps.

There were 1,205 households out of which 41.2% had children under the age of 18 living with them, 57.8% were married couples living together, 11.5% had a female householder with no husband present, and 26.5% were non-families. 22.3% of all households were made up of individuals and 8.6% had someone living alone who was 65 years of age or older. The average household size was 2.84 and the average family size was 3.33. 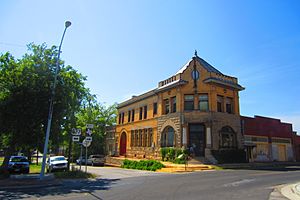 Farmers and Merchants Bank building, located at the northwest corner of the town square in Pilot Point, Texas

Pilot Point was platted on Christmas Day in 1853. G.W. Newcome was the surveyor, from Kentucky Town, Grayson County, Texas. The streets were laid out and lots were sold. One of the first buildings in the newly founded town was on the North side, a log building, home to the Star Drug Store operated by Dr. R.W. Eddleman and Alexander Cook, who came by covered wagon in 1852 from Missouri. Dr. Eddleman's brother-in-law, Major James Walcott, also built a General Store on the Northeast corner of the new town square. The town got its name from being the highest point in the area, thus an observation point for crossing the Trinity River. The wagon pilots nicknamed it "the Pilot's Point" long before there was a town. On October 13, 1908, several Holiness Christian groups came together and formed the Church of the Nazarene at Pilot Point. A memorial commemorating the event is located at the local Church of the Nazarene facility, approximately two blocks west of U.S. Highway 377. Other churches in the community hold particular historical significance in the community. First Baptist Church, Pilot Point Church of Christ and St. Thomas Aquinas Catholic Church are among the oldest, continuously functioning Christian congregations in the community. First Baptist Church claims an 1856 founding date that precedes the Civil War. Pilot Point Church of Christ claims a founding date of 1864 and boasts that it currently occupies the meeting house built by church founders in 1874 from timber hauled by ox-drawn carts from Shreveport, Louisiana. St. Thomas Aquinas Catholic Church claims a founding date of the winter of 1891-1892. The Pilot Point Church of Christ and St. Thomas Aquinas Catholic Church are designated as historical sites by the Texas Historical Commission. Rev. J.L. Truett (the brother of the famous pastor George W. Truett of First Baptist Church-Dallas fame) was the first pastor and founder of Calvary Baptist Church which formed in 1907.

The City of Pilot Point, Pilot Point Post-Signal (newspaper), and Skinner Cemetery are also sites of local historical significance and are designated sites by the Texas Historical Commission. A series of memorial markers permanently installed in the center of the town square commemorates the service of multiple generations of men and women from the community and area who sacrificed their lives in military service, primarily in the 20th century.

All content from Kiddle encyclopedia articles (including the article images and facts) can be freely used under Attribution-ShareAlike license, unless stated otherwise. Cite this article:
Pilot Point, Texas Facts for Kids. Kiddle Encyclopedia.