Valley View is a city in Cooke County, Texas, United States. The population was 757 at the 2010 census.

The town was first settled in 1870 by the Lee family. L. W. Lee plotted a town on his land in 1872, naming it "Valley View", presumably for the view offered at the site of Spring Creek valley. Eighteen families moved in, and a post office opened in the community that same year.

A blacksmith shop was opened in 1873, and the shop was used for the community's first school. By 1884 the town had an estimated 250 inhabitants, three steam gristmills and cotton gins, three general stores, and shipped cotton, livestock, and wheat. The Gulf, Colorado and Santa Fe Railway (now the BNSF Railway) reached the town in 1886. Valley View had four church buildings and a hotel by 1890, and the Valley View Independent School District was incorporated in 1902. In 1903 the town witnessed dramatic growth with the completion of a two-story brick school house and six brick business buildings, the arrival of telephone service, and the opening of a bank. The following year the Valley View News began publishing weekly. The community had an estimated population of 600 by 1914. 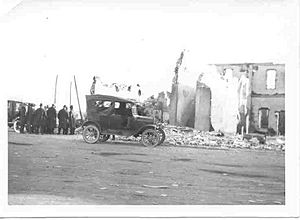 Two fires struck the town in 1924. In the fall the east side of the town square was burned down. On the morning of December 19 bank robbers started a second fire as they robbed the First National Bank of $5,000. A further two city blocks were destroyed. 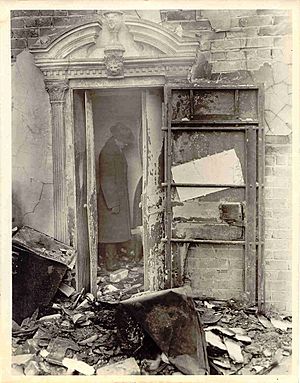 John Marvin Jones, a member of the U.S. House of Representatives from 1916–40 and later Chief Judge of the federal Court of Claims, was born in Valley View.

The climate in this area is characterized by hot, humid summers and generally mild to cool winters. According to the Köppen Climate Classification system, Valley View has a humid subtropical climate, abbreviated "Cfa" on climate maps.

There were 270 households out of which 38.5% had children younger than the age of 18 living with them, 62.6% were married couples living together, 14.8% had a female householder with no husband present, and 20.0% were non-families. 17.8% of all households were made up of individuals and 7.8% had someone living alone who was 65 years of age or older. The average household size was 2.73 and the average family size was 3.10.

The Valley View Area Chamber of Commerce was organized in 1997. There are two restaurants in Valley View: Lil' Brick Oven (Pizza), and a Dairy Queen franchise. Whiskey Hollow distillery and Firelight Vineyards wine tasting room are located on the downtown square along with the Rustic Ranch Furniture Co. The major businesses in town are a trucking company hub and the Martindale Feed Mill, both owned by Alan Ritchey, Inc. First State Bank of Gainesville has a branch near Interstate 35. A motel was opened in early 2008.

The town has a chapter of Keep Texas Beautiful. Keep Valley View Beautiful was named first-place winner in the 2006 Governor's Community Achievement Awards and received $60,000. The money is earmarked for renovations to the downtown square.

All content from Kiddle encyclopedia articles (including the article images and facts) can be freely used under Attribution-ShareAlike license, unless stated otherwise. Cite this article:
Valley View, Texas Facts for Kids. Kiddle Encyclopedia.