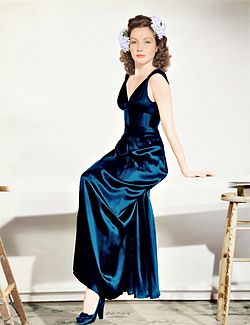 In most of her early movies, Bari often played as chorus girls or receptionists. She could hardly find starring roles in movies. Rare leading roles were China Girl (1942) and The Spiritualist (1948).

During World War II, Bari was the second most-popular pin-up girl; Betty Grable was the first.

Bari's movie career died out in the 1950s as she approached her 40th birthday. However, she continued working at a limited pace. She played matronly characters instead of temptresses.

Bari quickly took up the medium of rising television in the 1950s. In 1950, she acted in the live sitcom Detective's Wife.

Bari was born near Roanoke, Virginia. She died of a heart attack in Santa Monica, California at age 75.

All content from Kiddle encyclopedia articles (including the article images and facts) can be freely used under Attribution-ShareAlike license, unless stated otherwise. Cite this article:
Lynn Bari Facts for Kids. Kiddle Encyclopedia.