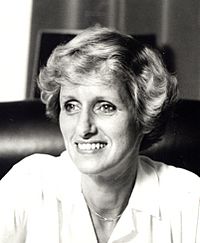 Lynn Morley Martin (born Judith Lynn Morley; December 26, 1939) is an American politician and businesswoman. She is a Republican. She was the United States Secretary of Labor from 1991 to 1993. She also served as a member of the U.S. House of Representatives from Illinois's 16th congressional district from 1981 to 1991.

Martin was born in Evanston, Illinois. She had two children with her first husband John Martin. In 1987, she married judge Harry Leinenweber.

All content from Kiddle encyclopedia articles (including the article images and facts) can be freely used under Attribution-ShareAlike license, unless stated otherwise. Cite this article:
Lynn Morley Martin Facts for Kids. Kiddle Encyclopedia.