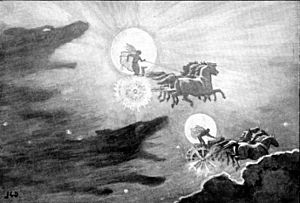 Mani is a god in Norse mythology. He was made when the sparks of the realm of fire were collected. The other gods were not pleased with Mani and his sister Sol. So the gods made them ride in carts. The purpose of the siblings being in the carts was to guide the moon and sun. The reason for the waxing and wanning moons is because Mani took two kids so they would cover parts of the moon. The reason for lunar eclipses is Hati (the offspring of Fenrir who is to chase Mani) getting close to Mani. At Ragnarok, Hati will finally consume Mani.

All content from Kiddle encyclopedia articles (including the article images and facts) can be freely used under Attribution-ShareAlike license, unless stated otherwise. Cite this article:
Máni Facts for Kids. Kiddle Encyclopedia.