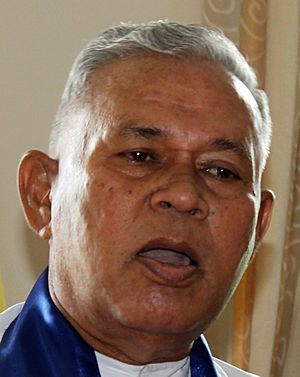 Munasinghe Kariyawasam Appuhamilage Don Somadasa Gunawardana (6 March 1947 – 19 January 2016) was a Sri Lankan politician. He was a member of the Parliament of Sri Lanka for the Sri Lanka Freedom Party and later the United National Party. He was Minister of Land from 12 January 2015 until his death.

All content from Kiddle encyclopedia articles (including the article images and facts) can be freely used under Attribution-ShareAlike license, unless stated otherwise. Cite this article:
M. K. A. D. S. Gunawardana Facts for Kids. Kiddle Encyclopedia.