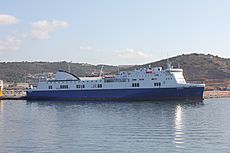 On 28 December 2014, Norman Atlantic caught fire in the Strait of Otranto, in the Adriatic Sea. Eight people were killed and 432 were rescued.

All content from Kiddle encyclopedia articles (including the article images and facts) can be freely used under Attribution-ShareAlike license, unless stated otherwise. Cite this article:
MS Norman Atlantic Facts for Kids. Kiddle Encyclopedia.