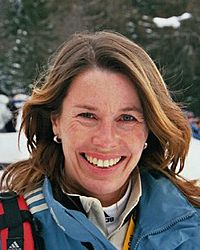 Magdalena "Magda" Forsberg (born 25 July 1967 in Ullånger, Sweden as Magdalena Wallin) is a Swedish former cross country skier and biathlete. She won the overall Biathlon World Cup for six years straight between the seasons of 1996-1997 and 2001/2002. She also won several Biathlon World Championships titles. She also participated in the Cross-Country Skiing World Cup between the seasons of 1987/1988 and 1995/1996. Her best results at the Winter Olympics were in Albertville in 1992 where she finished seventh in the 4 × 5 km relay and 26th in the 15 km event.

All content from Kiddle encyclopedia articles (including the article images and facts) can be freely used under Attribution-ShareAlike license, unless stated otherwise. Cite this article:
Magdalena Forsberg Facts for Kids. Kiddle Encyclopedia.