Mai sings in the Egyptian dialect, though she was born to a Jordanian father and a Lebanese mother. She has been living in Egypt ever since she was young and has stated she almost lived her whole life there. She gained a degree in Business Studies from Maritime Academy in Egypt.

Mai states that luck has played a big part in her being of where she is right now:

"I won't lie and give you the clichéd line of 'I've been working towards this all my life since I was a child' and all that stuff. I knew I had a very strong artistic side to me, and I had a strong passion towards music, but I never thought I'd make a career out of it one day." 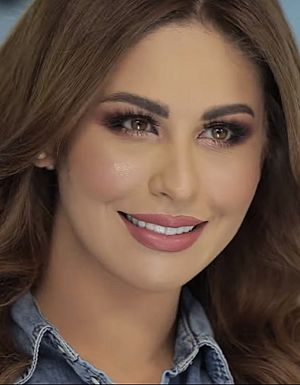 She married Egyptian businessman Ali al-Refai from November 2010 to 2012, with whom she had her daughter, Lili.

All content from Kiddle encyclopedia articles (including the article images and facts) can be freely used under Attribution-ShareAlike license, unless stated otherwise. Cite this article:
Mai Selim Facts for Kids. Kiddle Encyclopedia.