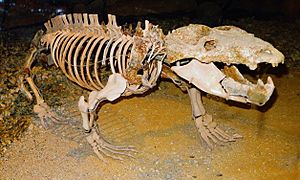 Chiniquodon, an Upper Triassic cynodont, close to the ancestry of mammals. Museum of Paleontology, Tübingen 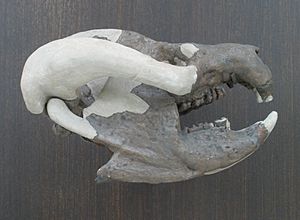 Mammal-like reptile is an old term for the therapsids: those synapsids which gave rise to the true mammals.

The term is both outmoded and a mistake, because mammals did not descend from reptiles. Both groups descended from early amniotes (egg-laying tetrapods), probably in the Lower or Middle Carboniferous. The precursors of reptiles are called sauropsids, and the precursors of mammals are called synapsids. The immediate ancestors of the mammals came from a group of therapsids called the cynodonts.

There are a number of characteristics which cannot be seen on fossils, but which are of great importance.

" It is clearly quite impossible for the condition found in birds and modern reptiles to have arisen from that found in mammals or vice versa". Kermack.6

This supports the division of amniotes into sauropsida and synapsida.

All content from Kiddle encyclopedia articles (including the article images and facts) can be freely used under Attribution-ShareAlike license, unless stated otherwise. Cite this article:
Mammal-like reptile Facts for Kids. Kiddle Encyclopedia.