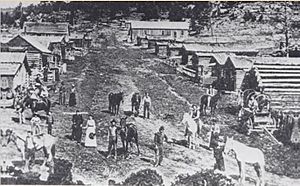 Manhattan is a ghost town located 4 miles (6.4 km) north of Rustic in Larimer County, Colorado, United States at an elevation of 8,474 feet (2,583 m). It became a mining town after discovery of gold in the area in September 1886. The area was difficult to mine and produced small quantities of gold, and the population dropped off by the turn of the century. The land was acquired by the United States Forest Service and burned down in the 1930s, but a cemetery remains.

The town was founded as a gold mining camp, after a "rich strike" was discovered west of Fort Collins in September 1886 between the Seven Mile and Elk Horn creeks. This resulted in a rush of miners to the area along Manhattan Creek. The town was platted in 1887 and a post office opened in March of that year. Today only a few boards remain of the town that had the Ace of Cubs saloon, a hotel, a butcher, livery stable, blacksmith, and houses. At first, people lived in tents and by the end of October 1887 there were 100 miners in town and 125 claims had been made. A school was opened the previous month that served Manhattan, Rustic, Elk Horn and Seven-Mile. There was little gold found and it was expensive to get to deposits deep into the earth. There were about 50 people in Manhattan in 1888. A discovery in the fall of 1890 led to a boom and building construction. Two people died in a mine explosion at the Black Hawk mine on November 13, 1892. There were about 300 people in Manhattan in 1898, but that had dropped to 50 in 1899.

There were about 300 men who mined the Laugh-a-lot, Little Tipsy, and Katy's Pet mines, but the town never realized the boom predicted by The Denver Post in 1897. A radio soap opera, Our Gal Sunday, and the book A Lady from Colorado, later adapted into an opera by Robert Ward, were based upon the life of Irish immigrant, Katie Lawder, who was orphaned at the age of 12 and lived in Colorado beginning at age 18. In 1888, she married Cecil Ernest Moon, an Englishman and Oxford graduate who later attained a title and a fortune. Katie took her cowgirl clothing and western frontier ways with her on trips with her husband to England. Ultimately she fell out of favor with Cecil and his family and the couple was divorced. She then lived entirely in Colorado and wished to continue to be called Lady Cecil Moon. She bought a ranch by 1901 for US$2,500 (NaN).

All content from Kiddle encyclopedia articles (including the article images and facts) can be freely used under Attribution-ShareAlike license, unless stated otherwise. Cite this article:
Manhattan, Colorado Facts for Kids. Kiddle Encyclopedia.