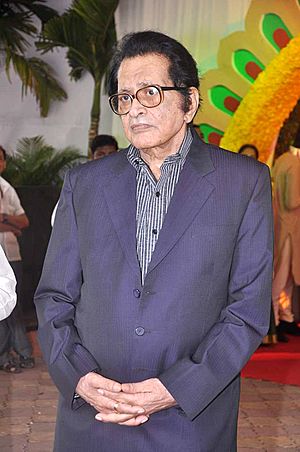 Manoj Kumar (born 24 July 1937) is a Bollywood Indian actor. He was born in Jandiala Sher Khan, a town in Punjab. He started his career appearing on 1965 film Shaheed. He is Hindu and studied at Hindu College of Delhi. He is married to Shashi Goswami, a Hindu and has two children; Vishal and Kunal. He also has a brother named Rajiv Goswami. He has a master's degree. He is one of the biggest stars in "Bollywood".

All content from Kiddle encyclopedia articles (including the article images and facts) can be freely used under Attribution-ShareAlike license, unless stated otherwise. Cite this article:
Manoj Kumar Facts for Kids. Kiddle Encyclopedia.