Kids Encyclopedia Facts
Not to be confused with Manor Farm Country Park.

Manor Park Country Park is a country park in West Malling, Kent, England. The 52-acre (210,000 m2) park, formerly the private gardens of the nearby Douces Manor, was purchased from the manor's owners by Kent County Council in 1973 to be converted into a public open space. The park is legally protected as public recreational land in perpetuity by Fields in Trust as part of the Queen Elizabeth II Fields Challenge.

This Country park was bought by Kent County Council, in 1973 by using a grant aid from the Countryside Commission. The site covers 52 acres (210,000 m2), part of which was the estate of the nearby 18th Century Manor House. The Grade Listed II building (formerly owned by Thomas Augustus Douce) is opposite the park (across St. Leonard's Street). It was still within the Douce family hands, until 1916, when the manor was bought by the Trustees of Fredrick Andrews to convert it into a convalescent home for ladies. The house was then used in the Second World War to accommodate airmen and was used as the headquarters and Mess for officers flying from the nearby RAF West Malling Airfield. Inside the Georgian wine cellar (of the house), 'the Twitch Inn' was established. This was so named because of all the nervous tics caused by constantly looking out for enemy aircraft, of the pilots. Names of the pilots are still etched on the walls of the cellar. Many famous air aces have frequented Douces Manor, including Sailor Malan, Stanford Tuck, Guy Gibson (a Dambusters pilot) and Wing Commander John ‘Cats Eyes’ Cunningham (a top RAF night-flight pilot) with his navigator Jimmy Rawnsley. The Twitch Inn is now designated as a Heritage Centre by the Tonbridge and Malling Borough Council and is let to the Parish Council on a peppercorn rent for 125 years. The centre opens up to 20 times a year and displays artefacts currently in the possession of the Malling Society, including Guy Gibson's uniform. Beechcroft Developments (current owners of Douces Manor) donated up to £5,000 to get the fund-raising for the heritage centre. 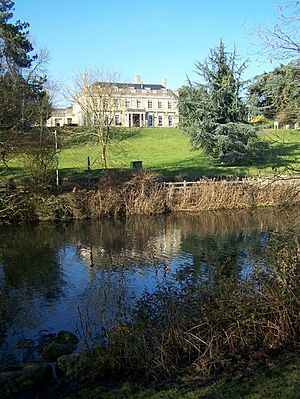 Adjacent to the country park is St Leonard's Tower.

Two public footpaths lead through the park. Ref No's MR141 and MR142. As well as various other trails within the park and around the lake. 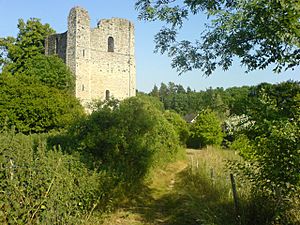 The park also is accredited with a Green Flag Award by Natural England.

The park is situated on St. Leonard's Road between West Malling and Kings Hill, not far from the A228 West Malling bypass. The park's car park operates a Pay and Display for parking fees.

All content from Kiddle encyclopedia articles (including the article images and facts) can be freely used under Attribution-ShareAlike license, unless stated otherwise. Cite this article:
Manor Park Country Park Facts for Kids. Kiddle Encyclopedia.