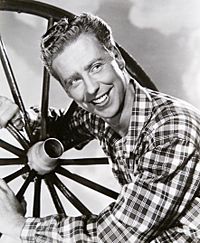 Marcel Emile Gaston LePlat (December 2, 1913 – March 29, 2014), better known by his stage name Marc Platt, was an American ballet dancer, musical theatre performer, and actor. He was best known for his role as Daniel Pontipee in the movie Seven Brides for Seven Brothers (1954). He was born in Pasadena, California. His father was an immigrant from France.

Platt died from pneumonia at a hospice on the morning of March 29, 2014 in San Rafael, California. He was 100 years old. He was outlived by his children.

All content from Kiddle encyclopedia articles (including the article images and facts) can be freely used under Attribution-ShareAlike license, unless stated otherwise. Cite this article:
Marc Platt (dancer) Facts for Kids. Kiddle Encyclopedia.