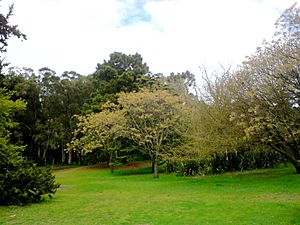 A maritime forest is an ocean coastal wooded habitat found on higher ground than dune areas within range of salt spray. They can be found along the Atlantic and Pacific Northwest coasts of the United States. They can also be found in areas of South-East Asia, for example Chek Jawa, a wetland reserve which also features a maritime forest as one of the independent ecosystem.

Some places where maritime forests can be found are: Bald Head Island (North Carolina), Necochea (Argentina), Jekyll Island (Georgia), and on almost all barrier islands, such as the Currituck Banks Reserve in the Outer Banks of North Carolina.

All content from Kiddle encyclopedia articles (including the article images and facts) can be freely used under Attribution-ShareAlike license, unless stated otherwise. Cite this article:
Maritime forest Facts for Kids. Kiddle Encyclopedia.