Marjolein Bastin (née uit den Bogaard) (born 1943) is a Dutch nature artist, writer, children's author and illustrator. She is the creator of the character "Vera the Mouse".

Bastin was born in Loenen (aan de Vecht) and studied at the Academy of Arts in Arnhem, where she met her husband and manager Gaston Bastin. Her father was educator and photographer John Henri uit den Bogaard (1911-1993). They have a daughter, Sanna (born in 1973), and a son, Mischa (born in 1974). Sanna runs the "Marjolein Bastin Kadowinkel" (The Marjolein Bastin Giftshop) while Mischa is a lawyer in Kansas City, USA. Marjolein and Gaston divide their time between country homes in the Netherlands and Missouri, and a tropical retreat in the Cayman Islands. 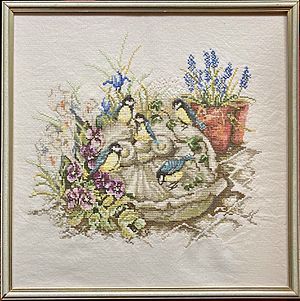 Embroidery of great tits around a water bowl with black grapes in the background (made by S.C. Bakker, ca. 1989). Design by Marjolein Bastin.

From 1960 to 1965, Bastin worked for different advertising agencies and publishers. Shortly after completing her studies at the Academy of Arts, she was asked to illustrate a one-page feature for the popular Dutch women's weekly Libelle. A Hallmark Cards designer discovered Bastin's artwork while on a trip to the Netherlands in the early 1990s. Stationery, greeting cards, home décor items and gifts in Hallmark's Nature's Sketchbook by Marjolein Bastin line are among the company's best-selling offerings. Many of her drawings are available as cross-stitch patterns, through Lanarte. Heye Puzzles offer Bastin's work as jigsaw puzzles.

All content from Kiddle encyclopedia articles (including the article images and facts) can be freely used under Attribution-ShareAlike license, unless stated otherwise. Cite this article:
Marjolein Bastin Facts for Kids. Kiddle Encyclopedia.