Kids Encyclopedia Facts
This page is about the vegetable. For other uses, see Marrow (disambiguation). 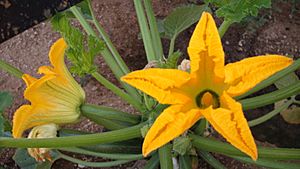 A marrow is a vegetable, the mature fruit of certain Cucurbita pepo cultivars. The immature fruit of the same or similar cultivars is called courgette (in Britain, Ireland, France, the Netherlands, Singapore, Malaysia and New Zealand) or zucchini (in North America, Japan, Australia, the Czech Republic, Italy, Germany and Austria). Like courgettes, marrows are oblong, green squash, but marrows have a firm rind and a neutral flavour ("overgrown when picked and insipid when cooked"), making them useful as edible casings for mincemeat and other stuffings. They can be stored for several weeks after harvest (like pumpkins and other winter squash), to be processed for food when required. They are a vegetable used in Great Britain and areas with significant British influence, though their popularity is waning in favor of immature summer squash like courgette.

Giant marrows are grown competitively in the United Kingdom, where the term "marrow" is often restricted to the striped, thick-skinned cultivar.

In a culinary context, marrows are treated as a vegetable; usually cooked and presented as a savory dish or accompaniment. Botanically, marrows are fruit, a type of botanical berry, being the swollen ovary of the marrow flower. Marrows, like all squash, have their ancestry in the Americas. 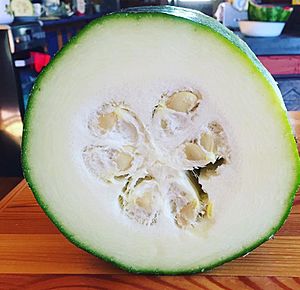 According to the Oxford English Dictionary, the first mention of vegetable marrows dates to 1822, zucchini to 1929, and courgettes to 1931. Before the introduction of Cucurbita species from the New World, marrow signified the immature, edible fruits of Lagenaria, a cucurbit gourd of African origin widely grown since Antiquity for eating when immature and for drying as watertight receptacles when grown to maturity. 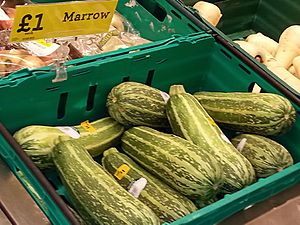 Vegetable marrows (distinct from courgettes) on sale in a British supermarket.

Marrows are commonly cultivated in the British Isles, and the term "marrow" for the plant and for the fruit is current there, especially for the striped, thicker-skinned cultivar. However, both in North America (since the 1920s) and in Britain (since the 1960s), thinner-skinned immature marrows have gained popularity due to their tender skin and distinct flavour. Hedrick (1928) in his book The vegetables of New York p.50, describes the "English Vegetable Marrow" as "one of the earliest forms of marrow squash grown, but has never been exceedingly popular in this country".

The fashion for eating immature marrows, called in Britain "courgettes", is relatively recent in Britain. Sudell (1966) does not mention courgettes, although he has a section on "vegetable marrow", noting both trailing (vining) and bush types and saying "cut when young". Witham Fogg (1966) wrote "Courgettes These are really very tender baby marrows which have long been popular in France. ... Cooked and eaten with butter they form a very palatable dish." He devotes a page and a half to (vegetable) marrows and less than half a page to courgettes, which he clearly regards as something new to Britain.

The record for the world's largest marrow is currently being held by William Gibbs who grew his giant from an allotment in North West Leicestershire. It weighed a surprising 128 pounds. Gibbs was regarded as a master in his trade but retired from competing after only two years at his peak when his crop was sabotaged by a rival grower. He was not only able to grow the marrows out long but expanded girth by around 415mm from the previous year. Gibbs specialised in marrow growing before moving to the Gladioli (flower) section.

Members of the plant family Cucurbitaceae, which includes zucchini, marrows, pumpkins and cucumbers, can contain toxins called cucurbitacins. These are chemically classified as steroids; they defend the plants from predators, and have a bitter taste to humans. Cultivated cucurbitaceae are bred for low levels of the toxin and are safe to eat. However, ornamental pumpkins can have high levels of cucurbitacins, and such ornamental plants can cross-fertilise edible cucurbitaceae – any such cross-fertilised seeds used by the gardener for growing food in the following season can therefore potentially produce bitter and toxic fruit. Also, dry weather conditions or irregular watering can stress the plant and favour the production of the toxin, which is not destroyed by cooking.

In August 2015, a 79-year-old German man and his wife ate a marrow grown by a neighbour. The couple noted the unusually bitter taste. Shortly afterwards they were both admitted to a Heidenheim hospital, apparently with symptoms of a gastrointestinal infection. The woman, who had eaten a smaller portion, survived, while the man died. Toxicological analysis of the meal confirmed the presence of cucurbitacin.

All content from Kiddle encyclopedia articles (including the article images and facts) can be freely used under Attribution-ShareAlike license, unless stated otherwise. Cite this article:
Marrow (vegetable) Facts for Kids. Kiddle Encyclopedia.