Martha Lucía Ramírez Blanco (born 4 July 1954 in Zipaquira) is a Colombian lawyer, politician, and the current Vice President of Colombia.

Elected Senator of Colombia in 2006, Ramírez introduced legislative initiatives to permit women to attain the rank of General in the Military Forces of Colombia, and to mandate English teaching in schools. Ramírez was Colombia’s first female Minister of National Defence, serving from 2002 to 2003 in the administration of President Álvaro Uribe Vélez, and the second woman in Latin America to hold this title. She has also served as the 6th Minister of Foreign Trade of Colombia, from 1998 to 2002.

In 2018, Ramírez became the first woman elected to serve as Vice President of Colombia, running on a ticket with Iván Duque Márquez. 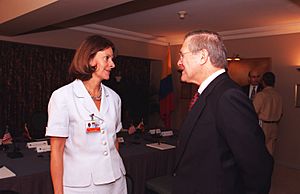 Minister Ramírez speaking with her counterpart, United States Secretary of Defense Donald Rumsfeld during a defence summit in Santiago, Chile in 2002.

Ramírez was born on 4 July 1954 in Zipaquira, Colombia to Álvaro Ramírez Suárez and Alba Blanco Venturoli, the eldest and only daughter of their four children. In 1974 she married Álvaro Rincón, a Colombian architect; together they have one daughter, María Alejandra. She is of Italian descent through her mother, and thorough her father, she is related to Jesús Ramírez Suárez, her uncle, who served as Chamber Representative for Cundinamarca.

A lawyer from the Pontifical Xavierian University, she holds a specialization degree in Legal Sciences and Socioeconomics, and postgraduate specialisations in Financial Law from the University of the Andes, and in Business Management from La Sabana's INALDE Business School. In 1996 she received a fellowship from Harvard University's Center for International Affairs, focusing on the internationalisation of the Colombian economy in the context of the rise of regional blocks and economic and commercial integration.

All content from Kiddle encyclopedia articles (including the article images and facts) can be freely used under Attribution-ShareAlike license, unless stated otherwise. Cite this article:
Marta Lucía Ramírez Facts for Kids. Kiddle Encyclopedia.