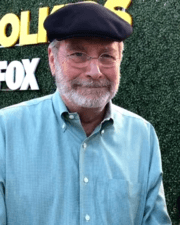 Martin Mull (born August 18, 1943) is an American comedian, painter, recording artist, movie, television, stage, and voice actor. He has appeared in animated shows including American Dad!. He also played Russell the pharmacist in Two and a Half Men. He also voiced Vlad Master in Danny Phantom.

Mull was born on August 18, 1943 in Chicago, Illinois. He was raised in North Ridgeville, Ohio and in New Canaan, Connecticut. Mull has been married to Wendy Mull since 1982. He has a daughter, Maggie.

All content from Kiddle encyclopedia articles (including the article images and facts) can be freely used under Attribution-ShareAlike license, unless stated otherwise. Cite this article:
Martin Mull Facts for Kids. Kiddle Encyclopedia.