Maruoka Castle (丸岡城, Maruoka-jō) is located in Sakai, Fukui Prefecture. It is also called Kasumi-ga-jō (霞ヶ城). The castle tower was built between 1624 to 1644. It is one of the 12 Existing Castle Towers in Japan (現存十二天守, genzon-jūni-tenshu), and also one of the national important cultural properties. 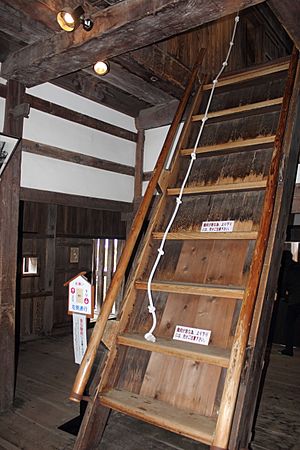 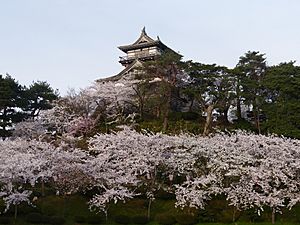 In 1576, Nobunaga Oda ordered Katsutoyo Shibata to build Maruoka Castle to get ready for the ikkō-ikki, a rebellion by believers of the Jōdo Shinshū sect of Buddhism in the 15th-16th centuries. In 1613, Narushige Honda became the first lord, castle owner, of the Maruoka Castle. After the Honda family, the Arima family served as lords of Maruoka Castle from 1695 to 1869. Shigesumi Arima, who became a lord in 1772 to 1830 rebuilt the local domain economy. In 1948,  July 8, there was  an earthquake in Fukui, and the castle tower of Maruoka Castle destructed, but in 1955, the castle tower was repaired by recycling more than 70% of the original materials of Maruoka Castle.

Maruoka Castle’s stone walls are about 6.2 meters high. The stone walls were built using nozura-zumi (野面積み), an architectural method to build stone walls with a good system of drains. Thus, if it is heavy rain, there is no worry of destruction. Maruoka Castle is also famous for its steep stairs. The stairs that go up from the first floor to the second floor are at an angle of 65 degrees, and the stairs from the second floor to the third floor are at an angle of 67 degrees.

About 400 cherry trees were planted around Maruoka Castle, and this place was chosen as one of the Japan’s Top 100 Cherry Blossom Viewing Sites in 1990. Every spring, the Cherry Blossom Festival is held here.

"A Brief Message From the Heart " Letter Contest (一筆啓上賞, ippitsukeijō-shō)

Shigetsugu Honda, whose son was the first lord of Maruoka Castle, sent a letter to his wife during a war at Shitaragahara in 1575.

Museum of History and Folklore

Brief Message from the Heart Museum

This museum was opened in 2015, August 23. In this museum, the winning works of the Contest of Brief Massages are exhibited.

All content from Kiddle encyclopedia articles (including the article images and facts) can be freely used under Attribution-ShareAlike license, unless stated otherwise. Cite this article:
Maruoka Castle Facts for Kids. Kiddle Encyclopedia.