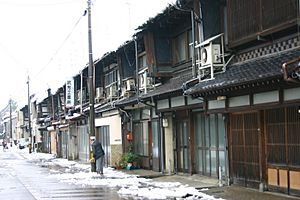 The area around Komatsu was part of ancient Kaga Province. The area became part Kaga Domain under the Edo period Tokugawa shogunate. Komatsu housed the retirement castle of Maeda Toshitsune. While nearly all of the castle was demolished, its garden still remains as Rojou Park. In the spring, this is one of the prefecture's best spots for cherry blossom viewing.

Following the Meiji restoration, the area was organised into Nomi District, Ishikawa. The town of Komatsu was established with the creation of the modern municipalities system on April 1, 1889. Komatsu merged with surrounding municipalities to become a city on December 1, 1940.

Komatsu was traditionally known for the production of Kutani ware ceramics and for silk. Komatsu Limited, the construction and mining equipment company, was founded in Komatsu in 1921. 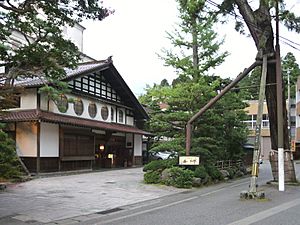 All content from Kiddle encyclopedia articles (including the article images and facts) can be freely used under Attribution-ShareAlike license, unless stated otherwise. Cite this article:
Komatsu, Ishikawa Facts for Kids. Kiddle Encyclopedia.