Katsuyama is located in the Katsuyama Basin of far northern Fukui Prefecture, bordered by Ishikawa Prefecture to the north, and surrounded by mountains on all sides. The Kuzuryū River flows through part of the city. Parts of the city are within the borders of Hakusan National Park. 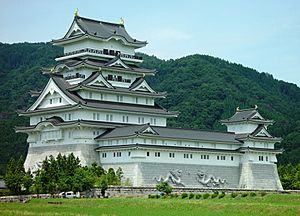 Katsuyama is part of ancient Echizen Province. During the Edo period, the area was divided between the holdings of Echizen-Katsuyama Domain, Fukui Domain, Ōno Domain, and Gujō Domain. Following the Meiji restoration, it was organised into part of Ōno District in Fukui Prefecture. With the establishment of the modern municipalities system on April 1, 1889, the town of Katsuyama was established. It annexed the village of Inose on April 15, 1931, On September 1,1954, Katsuyama merged with the villages of Arado, Muraoka, Kitago, Kitadani, Shikadani, Osoha, Heisen-ji and Nomuki to form the city of Katsuyama.

All content from Kiddle encyclopedia articles (including the article images and facts) can be freely used under Attribution-ShareAlike license, unless stated otherwise. Cite this article:
Katsuyama, Fukui Facts for Kids. Kiddle Encyclopedia.