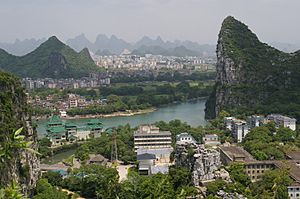 Guilin and the Lijiang River 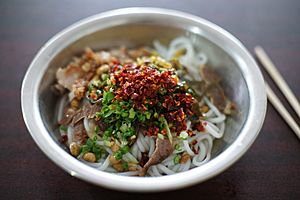 Guilin is a prefecture-level city in the northeast of the Guangxi Zhuang Autonomous Region, China. It is on the west bank of the Li River. It borders Hunan to the north. Its name means, "Forest of Sweet Osmanthus". This is due to the large number of fragrant Sweet Osmanthus trees grown throughout the city. It has long been renowned for its scenery of karst rock formations. It has crystal clear (meaning as clear as glass) waters and many caves to explore. Guilin is one of China's most popular tourist destinations. It was the first city open to tourism after 1949. There are many tours including photographic tours.

All content from Kiddle encyclopedia articles (including the article images and facts) can be freely used under Attribution-ShareAlike license, unless stated otherwise. Cite this article:
Guilin Facts for Kids. Kiddle Encyclopedia.