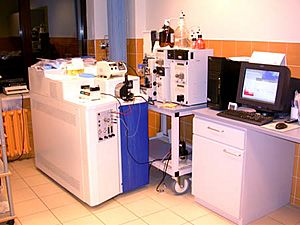 Mass spectrometry (MS) is a process that measures the mass-to-charge ratio of charged particles. It is used to find out the mass of particles, and to find the basic chemical elements in a sample or molecule. It can also make clear the chemical structures of molecules, such as peptides and other chemical compounds. It works by ionizing the particles in the sample, which means an electron is removed from each particle, producing positively charged ions. This is done by using an electron gun - a high energy beam of electrons is passed through the sample to make electrically charged particles or ions. The ions are accelerated through a short tunnel, by use of negatively charged plates to which the positively charged ions are attracted. On passing through the tunnel, the ions are exposed to a magnetic field which causes them to travel in a curved path, depending on how heavy they are. Heavier ions are bent less than lighter ions (assuming they have the same +1 charge), when experiencing the same 'pull' from the magnetic field. This results in heavier ions hitting a detection plate, at the end of the tunnel, at a different position to lighter ions. From this information, the mass-to-charge ratio of the particles, and the relative abundance (how much was in the sample) of each type of particle can be worked out.

The first mass spectroscope was invented by the British physicist J. J. Thomson in 1912. His student Francis Aston developed the mass spectroscope for practical use. They are now widely used for agriculture, brewing, food processing, geology, petroleum exploration, medical drugs and space exploration.

All content from Kiddle encyclopedia articles (including the article images and facts) can be freely used under Attribution-ShareAlike license, unless stated otherwise. Cite this article:
Mass spectrometry Facts for Kids. Kiddle Encyclopedia.