Matapuna had several sidings on the North Island Main Trunk line, in the Ruapehu District of New Zealand, serving the east Taumarunui suburb on the north bank of the Whanganui River. It was 2.9 km (1.8 mi) north west of Manunui and 2.95 km (1.83 mi) east of Taumarunui. Work was largely complete by May 1903, and freight was handled from 22 June 1903. A fixed signal was placed at the station and a distant at the bridge in 1917 and the ballast pit siding was interlocked by tablet in 1918. A racecourse opened to the south of the bridge in 1916 and some trains served the course on race days, though no platform appears on aerial photos and only the ballast pit was mapped.

Before the railway came, a Ngāti Hauā kāinga was on the south side of the river, which could be forded, except when in flood. 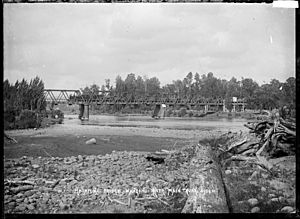 Puketapu was recognised as a potential source of totara as early as 1903 and the company was advertising for bush cutting and construction of a 1.5 mi (2.4 km) tramway in 1905. The sawmill must have been operating by 1906, when they experimented with floating sawn timber down the river. Another sawmill was also operating nearby in 1906, which possibly the company had taken over by 1908, when the tramway extended for 5 mi (8.0 km). The company was in liquidation in 1909, but was taken over by Pukuweka Sawmills. The bush tramway was linked to the main line and had two locomotives in 1911. The last year the mill was recorded as using the railway siding was 1915.

Most of the original ballast for the central portion of the NIMT was extracted from the river at the ballast reserve, just north of the bridge, from 1903.

All content from Kiddle encyclopedia articles (including the article images and facts) can be freely used under Attribution-ShareAlike license, unless stated otherwise. Cite this article:
Matapuna railway station Facts for Kids. Kiddle Encyclopedia.