Taumarunui is a small town in the King Country of the central North Island of New Zealand. It is on State Highway 4 and the North Island Main Trunk Railway. It is under the jurisdiction of Ruapehu District, Manawatu-Wanganui Region.

It is on an alluvial plain set within rugged terrain on the upper reaches of the Whanganui River, 65 km south of Te Kuiti and 55 km west of Turangi. Its population is 4,500 (2013 census, this is down 14% from the 2001 census), still making it the largest centre for a considerable distance in any direction.

The name Taumarunui is reported to be the dying words of the Māori chief Pehi Turoa - taumaru meaning screen and nui big, literally translated as Big Screen, being built to shelter him from the sun, or more commonly known to mean - "The place of big shelter". There are also references to Taumarunui being known as large sheltered location for growing kumara.

In the 1980s publication Roll Back the Years there are some details on how Taumarunui got its name. Extract: "According to Frank T Brown, who wrote in the Taumarunui Press in 1926, the name Taumarunui is closely connected with the arrival of and conquering of that portion of the King Country by the Whanganui River natives during the 18th century . . . The war party that succeeded in capturing the principal pa and taking prisoner the chief of the district was headed by "Ki Maru". His warriors, to show their appreciation of his prowess and the honour of the victory, acclaimed him "Tau-maru-nui", which means "Maru the Great", or "Maru the Conqueror", that name was taken for the district and has been used ever since."

On State Highway 4 south of Taumarunui are the villages of Manunui, Piriaka, Kakahi, Owhango, Raurimu and then National Park. To the north are the school and truck stop of Mapiu.

Taumarunui County was defined in the Waikato and King-country Counties Act 1922, this statute states:

Then subsequently in 1952 the Kaitieke County and the Ohura County were amalgamated with a new Taumarunui County.

Ngāpuwaiwaha marae is on Taumarunui Street; its main hapū are Ngāti Haua and Ngāti Hauaroa of the iwi Te Āti Haunui-a-Pāpārangi.

Taumarunui has many societies and community organizations. It has a Cosmopolitan Club and RSA, a Lodge of the Freemasons as well as Taumarunui Lodge NZ № 12 of the Royal Antediluvian Order of Buffaloes Grand Council. This Lodge of the Buffaloes was established sometime in the mid-late 1920s and thus predates the introduction of the Mighty NZR KA class steam locomotives that became the hallmark of NIMT Rail Transport of the forties, fifties and sixties. 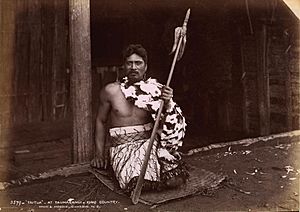 Taumarunui was originally a Maori settlement at the confluence of the Ongarue River with the Whanganui, important canoe routes linking the interior of the island with the lower Whanganui River settlements. Some places, notably the valley of the Pungapunga Stream, which joins the upper Wanganui near Manunui, were celebrated for the size and quality of totara, and large canoes were built there. The area is a border area between a number of iwi including Whanganui, Ngāti Maniapoto and Ngāti Tūwharetoa, who lived together in relative harmony.

Late in December 1843 Bishop Selwyn travelled from the district south of Taupo to a point on the Whanganui River about six miles downstream from Taumarunui and thence continued his journey to the coast by canoe. Towards the end of 1869 Te Kooti was at Taumarunui before his march through the western Taupo district to Tapapa. In the early 1880s the first surveys of the King Country commenced and by the early 1890s the Crown had begun the purchase of large areas of land.

In 1874 Alexander Bell set up a trading post, and became the first European settler. The town has a road called Bell Road.

During the New Zealand Land Wars a resident named William Moffatt manufactured and supplied Maori with a coarse kind of gunpowder. He was afterwards expelled from the district. Despite warnings he returned in 1880, ostensibly to prospect for gold, and was executed.

The Whanganui River long continued to be the principal route serving Taumarunui. Traffic was at first by Maori canoe, but by the late 1880s regular steamship communication was established. Taumarunui Landing (Image) was the last stop on Alexander Hatrick's steam boat service from Wanganui. The river vessels maintained the services between Wanganui and Taumarunui until the late 1920s, when the condition of the river deteriorated.

Later Taumarunui gained importance with the completion of the North Island Main Trunk Line in 1908-09 (celebrated in a ballad by Peter Cape about the station refreshment room). The line south of Taumarunui caused considerable problems due to the terrain, and has several high viaducts and the famous Raurimu Spiral. The Stratford - Okahukura Line to Stratford connected just north of Taumarunui. In more recent times, the town's economy has been based on forestry and farming. It has gained in importance as a tourism centre, especially as an entry point for voyagers down the scenic Wanganui River and as the possessor of a high quality golf course.

Town Mayors immediately prior to 1988 include: Charles Binzegger, Les Byars and Terry Podmore.

Under the Köppen, Taumarunui has a Oceanic climate:(Cfb). Due to location, low altitude and Geography surroundings, Taumarunui is more liable to warm to hot summers than other central North Island centres and in winter Taumarunui is cold and frosty. Rainfall yearly is 1,449 mm (57.047244 in). Annual sunshine yearly is 1822 hrs. In June 2002 Taumarunui recorded just 27 hrs of sun this lowest of the whole country beating the old record at Invercargill with 35 hrs in June 1935. The lowest temperature recorded in Taumarunui, -6.8 °C, was in July 2010.

All content from Kiddle encyclopedia articles (including the article images and facts) can be freely used under Attribution-ShareAlike license, unless stated otherwise. Cite this article:
Taumarunui Facts for Kids. Kiddle Encyclopedia.