On 6 April 1909 a Post Office opened at the station. In May 1911 a burglar blew the post office safe. In October 1911 was said to be moved from station. However, in 1912 the Town Board asked for a stationmaster and postmaster to be appointed as the post office was on the station.

Signalling was interlocked by tablet in 1918. In 1938 fixed home and distance colour-light signals were installed and it became a switch-out tablet station.

Two Railways Department houses were added in 1954, but on 17 February 1978 the goods shed closed, on 31 January 1982 the station closed, except for goods in wagon loads and by 22 January 1989 there was only a concrete block equipment building left. 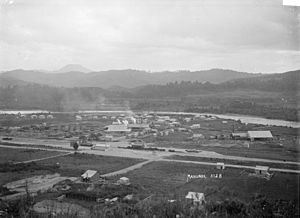 Manunui, with station in foreground, about 1908.

From 1911 Pungapunga Sawmilling Co also had a siding for 5 wagons.

All content from Kiddle encyclopedia articles (including the article images and facts) can be freely used under Attribution-ShareAlike license, unless stated otherwise. Cite this article:
Manunui railway station Facts for Kids. Kiddle Encyclopedia.