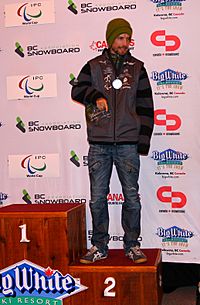 Matthew John Robinson (24 October 1985 – 21 February 2014) was an Australian snowboarder. He was a Paralympian. He won Australia's first IPC Alpine Skiing World Cup snowboard gold medal in Copper Mountain, Colorado in the United States. In February 2014, he got head and neck injuries after an accident at the La Molina ski resort in Spain. He was sent to fly back to Australia by plane soon after.

Robinson died from cardiac arrest on 21 February 2014 while refueling in Kuwait. He was 28 years old. His memorial service was held in Perth, Western Australia on 7 March. At the time of his death, he was living in Melbourne, Victoria with his fiancée.

All content from Kiddle encyclopedia articles (including the article images and facts) can be freely used under Attribution-ShareAlike license, unless stated otherwise. Cite this article:
Matthew Robinson (snowboarder) Facts for Kids. Kiddle Encyclopedia.