Maunalua Bay in the south of Eastern Honolulu (red) 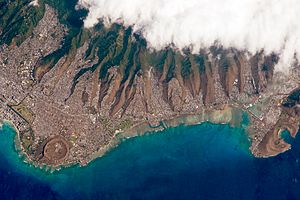 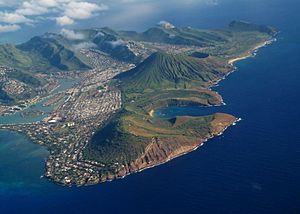 Maunalua Bay is a bay in the southeast of Honolulu, the capital of Hawaiʻi. The bay extends about 6.3 miles (8.5 kilometers) from the southern tip of Diamond Head, the Black Point, also called Kūpikipikiʻō , in the west to Portlock Point, also known as Kawaihoa Point to the east.

On the land side, just to the east of Diamond Head is the upmarket suburb of Kāhala. Following are several affluent hillside suburbs like Hawaii Loa Ridge, a gated community that occupies an entire slope. In the east is the suburb of Hawaii Kai, built by industrialist Henry J. Kaiser after World War II. Hawaii Kai has a marina, shopping centers, including a Costco branch, and numerous restaurants such as the well-known Roy's and an offshoot of the Hawaiian brewery Kona Brewing Co.. On the headland leading to Koko Head is the suburb of Portlock, which belongs to Hawaii Kai.

The name Maunalua (from Mauna = mountain and [ʻe]lua = two, in the language of the Polynesian natives) refers to the designation of the area around Hawaii Kai in the period of Polynesian settlement. The mountains, located inland from Portlock Point, are the 645 feet (196 meters) high Koko Head, and about 2.2 miles (3.5 kilometers) east thereof, close to Hanauma Bay the Koko Crater, the walls of which rise up to 1,207 feet (368 meters).

According to legend, Maunalua was one of the first settlements when the first people of Polynesia settled in Hawaiʻi around the 12th century. Native Hawaiians originally lived there by fishing and cultivating sweet potatoes (ʻuala) along the coastal plains at a place called Ke-kula-O Kamauwai. Maunalua was formerly famous for having the largest Native Hawaiian fishpond on Oʻahu. The 523 acre fishpond known as Keahupua-O-Maunalua had a wall or kuapā which originally spanned from Kuliʻouʻou headland and to what is now Portlock. The pond was used primarily to raise mullet (ʻawaʻawa) and was also home to a multitude of endemic or indigenous waterbirds. The area continued to be important for fishing and agriculture until the 1950s when the fishpond was filled for housing development.

The beach park was developed by Henry J. Kaiser during the development of Hawaii Kai Marina. Historically, the beach consists of 535,000 square feet (49,703 sq. m) of coral that was dredged and removed, creating a watercraft channel. Kaiser donated it to the City and County of Honolulu in 1960. Public access to the bay is easily made through the city and county beach park off of Kalanianaʻole Highway across from Hawaii Kai Drive.

Despite the tide height, this bay and reef are always accessible to watercraft, standup paddlers, and snorkelers. At low tide, people can walk out on the sandbar and explore the nearby reef. It is not uncommon to find moon jellies that get caught on the sand bar before the tide lowers.

Another scenic spot for tourists near Maunalua Bay is Hanauma Bay, known for having clear waters and many native fish, ideal for snorkeling and sightseeing.

All content from Kiddle encyclopedia articles (including the article images and facts) can be freely used under Attribution-ShareAlike license, unless stated otherwise. Cite this article:
Maunalua Bay Facts for Kids. Kiddle Encyclopedia.