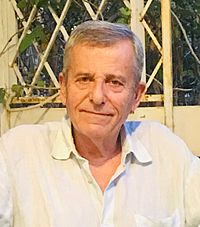 Maurizio Micheli (born 3 February 1947) is an Italian actor. He was born in Livorno, Italy. He is also a movie and theater director, screenwriter, playwright, comedian, and television presenter.

Born in Livorno, at 11 Micheli moved to Bari and at 20 to Milan where he graduated at the School of Dramatic Art at the Piccolo Teatro.

Officier of Order of Merit of the Italian Republic, Rome, 27 December 1999

All content from Kiddle encyclopedia articles (including the article images and facts) can be freely used under Attribution-ShareAlike license, unless stated otherwise. Cite this article:
Maurizio Micheli Facts for Kids. Kiddle Encyclopedia.