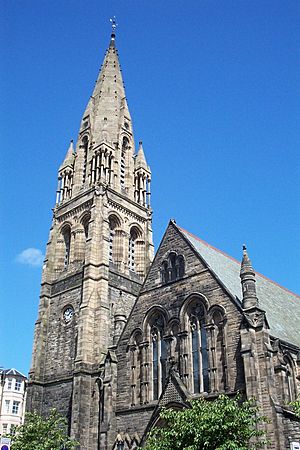 Mayfield Salisbury Church is a member of the Church of Scotland, part of the worldwide family of the Christian Church. It is situated approximately 1.5 miles (2.4 km) south of Edinburgh city centre at the junction of Mayfield Road and West Mayfield. The building was designed by the renowned Scottish architect, Hippolyte Blanc and the main building work took place between 1875 and 1879. It is particularly renowned for the range and quality of its stained glass. An extensive internal renovation of the sanctuary was undertaken in 2009.

In the mid nineteenth century, the Edinburgh suburb of Newington with its dwellings, shops and businesses, was bounded on its south side by an old drove road (now East and West Mayfield) beyond which were the farms and fields of Mayfield. However, in 1870 Duncan McLaren of Newington House, a past Lord Provost of Edinburgh and MP, began feuing his Mayfield land and by the time of his death in 1886 it was almost wholly built over. It was against this background that Mayfield Free Church (as it was first called) was built. The site for the present church was selected in July 1876, and the main sanctuary was completed in 1879, the spire being added in 1894. From the start this was a broad church which rapidly became widely known as a preaching centre, so that over the 130 plus years of its existence it has been blessed with a distinguished line of much loved and erudite preachers as minister. A detailed account of its history and past ministers, can be found at the church website.

Today Mayfield Salisbury offers a variety of services of worship. As well as the sanctuary, the premises also include two halls and several other meeting rooms. Thus a wide range of clubs and groups meet there and the buildings provide a focus point for much that goes on in this part of south Edinburgh. Revd Scott S McKenna has been the minister at Mayfield Salisbury since 2000. From September to June, the church choir provides music for Sunday worship and additional services. The choir is made up of keen amateurs and a small group of choral scholars and is led by Walter Thomson.

In recent years special autumn festivals have been held. In autumn 2010, there was a three-week Festival of Meditation and Prayer which included musical events, lectures, special services, and a pilgrimage. In the autumn of 2011, there was a Festival of Aging and Faith and in autumn 2012 a Festival of Science, Reason and Religion. More information may be found here. In 2013 there was a Year of Pilgrimage.

It is also used as a venue during the Edinburgh Festival Fringe.

All content from Kiddle encyclopedia articles (including the article images and facts) can be freely used under Attribution-ShareAlike license, unless stated otherwise. Cite this article:
Mayfield Salisbury Church Facts for Kids. Kiddle Encyclopedia.