This is a Portuguese name; the first family name is Aguiar and the second is da Silva.

Mayra Aguiar da Silva (born August 3 1991) is a Brazilian judoka. She was a bronze medallist in three consecutive Olympics, 2012, 2016 and 2020. She is also two-time world champion (2014 and 2017). She is the first Brazilian woman to win three Olympic medals in an individual sport.

Mayra was born in Porto Alegre and began judo training when she was young.

She trains under Kiko (Antônio Carlos Pereira) in a group with João Derly, Tiago Camilo and others in SOGIPA. Derly and Camilo are also her sporting idols.

In December 2008 she suffered a very serious injury of her right knee. She was unable to perform any judo training for almost 10 months, coming back only in September 2009.

She is one of the most talented Brazilian judokas in history. When she was 16 years old she competed at 2007 Pan American Games and won a silver medal.

In 2008, she competed at Olympic Games in Beijing but lost her only match with Spanish judoka Leire Iglesias.

In 2009, she missed the whole season because of a knee injury.

In 2010, after an injury, Mayra changed category from middleweight to half-heavyweight and won a gold medal at 2010 Pan American Judo Championships in El Salvador. In September of that same year, she participated at the 2010 World Judo Championships and lost the final to Kayla Harrison, from the United States, receiving the silver medal.

In 2012, Aguiar won the bronze medal at the 2012 Summer Olympics, winning three matches by ippon. Her only defeat was again to Harrison, who won the semifinal on the way to a gold medal.

Aguiar became world champion in 2014, defeating the French Audrey Tcheuméo in the final.

With Brazil hosting the 2016 Summer Olympics and Aguiar's recent triumphs, she was the favorite to win the gold. A difficult semifinal against Tcheuméo, where Aguiar was kept scoreless and was defeated on penalties, sent her again to the bronze match, which Aguiar won, giving her a second Olympic medal. 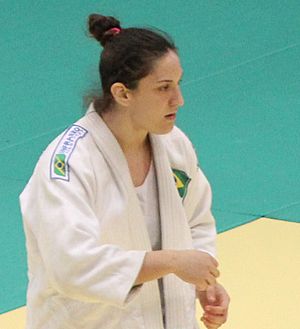 All content from Kiddle encyclopedia articles (including the article images and facts) can be freely used under Attribution-ShareAlike license, unless stated otherwise. Cite this article:
Mayra Aguiar Facts for Kids. Kiddle Encyclopedia.