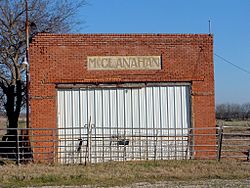 McClanahan, Texas is an unincorporated community in Falls County, Texas, 6 mi northeast of the county seat, Marlin, on FM 147.

A post office operated in the small town from 1887 to 1904. In 1890, when the population peaked at 150 residents, the community had two general stores and a Baptist church. Population continued to drop thanks in part to the Missouri Pacific Railroad abandoning the tracks that had run through the town between Marlin and Waco. The population was 42 in 2000.

All content from Kiddle encyclopedia articles (including the article images and facts) can be freely used under Attribution-ShareAlike license, unless stated otherwise. Cite this article:
McClanahan, Texas Facts for Kids. Kiddle Encyclopedia.