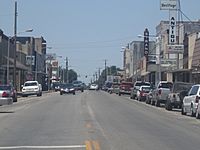 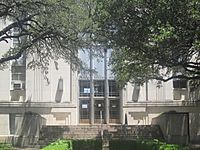 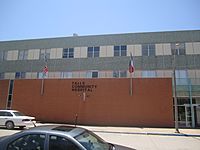 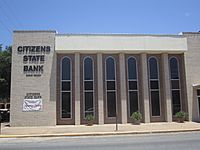 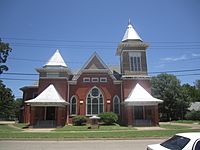 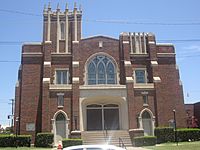 Marlin is a city in Falls County, Texas, United States. The population was 6,628 at the 2000 census but decreased by 10 percent to 5,967 in 2010. Since 1851, it has been the third county seat of Falls County. Marlin has been given the nickname "the Hot Mineral Water City of Texas". Mineral waters were found there in 1892.

The city of Marlin is located 4 miles (6 km) east of the Brazos River, which runs through the center of the county. The low falls on the river southwest of present-day Marlin was the site of Sarahville de Viesca, established in 1834 by Sterling C. Robertson. Marlin was incorporated in 1867. It is named after a pioneer patriot, John Marlin. His son-in-law, Samuel A. Blain, laid out streets and lots and drafted a map around a square. Three churches – Presbyterian, Methodist, and Baptist — were given lots first and relocated to the east side of the square. Zenas Bartlett's General Store was the first business to be established in Marlin. When Bartlett's wife died, the store was deeded to the city and used as a town hall. A simple brick building temporarily stood as a school. The first of four county courthouses was a log cabin. It was used for county business and court, a school, a church, a meeting place for political and community events, and as a dance hall. The fourth and present courthouse was constructed in 1938 and 1939, after the third courthouse, which was built in 1887, was declared unsafe.

Before Falls County was organized, the settlement of Marlin already had established private schools. A tuition school, Marlin Male and Female Academy, was located on Ward Street in 1871, north of the public square. The school was renamed and relocated before finally being sold in 1886, only to be destroyed by fire in 1900. A new public brick school was constructed in 1903. The Marlin Independent School District was established in 1923. Nearly half a century before in 1875, two other schools for African Americans were organized. The two black schools were dependent on state funds, and met in the African and Baptist churches. In 1916, the city council voted to build a school for blacks, which after it was first built, it was moved to Commerce Street, and named "Booker T. Washington". The two school districts merged in 1968 into the Marlin Independent School District. In 1900, the town's Jewish residents organized a Sunday school.

The 1890s and early 20 century; Falls and Arlington hotels

Despite not officially going over 8,000 (the largest population was recorded by the official US Census at about 7,900 in both 1950 and 1980) Marlin did get many tourists from around the country for its famous mineral water, which was believed to heal any sickness or pain, by bathing in it. Even though the waters had a smell to them, they still seemed to be "magic" when people bathed in the stuff, and actually felt better. Bath houses were opened around the town of Marlin so people could come and takes bathes in the mineral water, after it was discovered in 1892 during the search for an artesian well. The mineral water had put the town on the map as hundreds of thousands of tourists flocked to the area. With the end of World War II and the advent of penicillin there began a national and local decline in the hot mineral bath industry.

In 1929, Conrad Hilton built his eighth Hilton Hotel in his chain in Marlin, the nine-floor, 110-room Falls Hotel, which could be seen for miles from the city limits of Marlin. Across the street was the Marlin Sanitarium Bathhouse. An underground tunnel connected the two buildings.

A fire destroyed the underground tunnel, the Sanitarium Bath House and Buie Clinic. Except for three businesses located on the ground floor, the Falls Hotel was subsequently closed. The hotel building remains the tallest building in Falls County. The location of the bath house is adjacent to the city post office, and a gazebo and park occupy the site of the bathhouse and clinic buildings. The Arlington Hotel was first built as a three-floor hotel in 1895, and burned in 1899. An even more grand structure made of brick and stone followed, and was the headquarters of the New York Giants baseball team from about 1900–1920. When in about 1930 the Moody family of Galveston bought the Marlin Hilton Hotel from Conrad Hilton's first venture into his failed hotel business, the Moody's bought and tore down the Arlington Hotel to eliminate any competition.

Along with the decline of the hot mineral industry, almost all other "bathhouse related" business were, over the years, closed and their structure demolished. Mineral water now can only be obtained from a fountain outside the Marlin Chamber of Commerce.

Phones began appearing in households in Marlin in the year 1900. Automobiles, electricity, and Lone Star Gas followed shortly. By the mid-1900s, Marlin had a bottling company, stock pens, a brickyard, a turkey-processing plant (building can still be seen on Williams Street/South Business Highway 6), a saddlery, a water crystallization plant, and a pottery plant.

Wallace, a business-form printing company which was the employer of hundreds in Marlin, closed in the mid-2000s. Marlin Mills, a carpet manufacturing company, closed with the 1980s economic decline. A styrofoam company that had been open in another building in Marlin's declining industrial park caught fire and the remains were demolished. The Thomas T. Connally Veteran's Affair Hospital, a five-floor building in the residential area of Marlin, located at the corner of Ward and Virginia streets, closed in 2005, losing more than a hundred jobs as the economy in Marlin continued to struggle.

By 2009, different census estimates had said that Marlin's population had decreased by 400 to 800 people. An article in the Waco Tribune-Herald reported that Marlin could grow, having noted the establishment of a $10-million water plant. The article mentions a three-floor, sixty-room Best Western Hotel under construction on Highway 6 at Farm-to-Market Road 147. The Texas Department of Criminal Justice was establishing a hospital for prisoners at the former Veterans' Affairs Hospital which was expected to employ 100 to 150 persons. However, funds for the proposed Texas Department of Criminal Justice hospital were reallocated to renovate the TDJC hospital in Galveston which was badly damaged by Hurricane Rita.

The Heart of Texas Council of Governments granted the city of Marlin $35,000 to remove fifteen dilapidated buildings and structures in the town, which included 300 tons of debris. Over 6 miles (10 km) of water lines were constructed on 20 streets in 2011. The city also started and completed a 500,000-gallon water tower project.

In 2011, the city brought back its Annual Music and Blues Festival, and raised money to revamp the city baseball fields and revive the City Little League, which attracted 160 children that year.

On November 10, 2015, Marlin Chief of Police Darrell Allen died while in office. Chief Allen had suffered a gunshot while at an off-duty security job in Temple on November 1. The suspect was placed into custody at the scene by other officers working security.

In December 2015 a protest occurred after the city water had been turned off for almost a week. The event was originally a rally supporting jobs in Marlin and a pro-Marlin ISD rally.

Highways and other major roads

Marlin and Falls County are served by the Marlin Municipal Airport, located 4 miles (6 km) northeast of the center of Marlin.

There were 2,415 households out of which 30.2% had children under the age of 18 living with them, 35.7% were married couples living together, 22.5% had a female householder with no husband present, and 37.5% were non-families. 34.8% of all households were made up of individuals and 18.9% had someone living alone who was 65 years of age or older. The average household size was 2.47 and the average family size was 3.21.

Marlinites have enjoyed the revival of the Marlin Music and Blues Festival since 2011. Originally the Wood Street Blues Festival from 2003 to 2005, the event was held in late May on consecutive days in honor of musician Blind Willie Johnson, a former resident of Marlin.

In May 2013, after a hiatus, the famous Marlin Festival Days returned to the city park.

The climate in the area is characterized by hot, humid summers and generally mild to cool winters. According to the Köppen climate classification system, Marlin has a humid subtropical climate, abbreviated "Cfa" on climate maps.

All content from Kiddle encyclopedia articles (including the article images and facts) can be freely used under Attribution-ShareAlike license, unless stated otherwise. Cite this article:
Marlin, Texas Facts for Kids. Kiddle Encyclopedia.