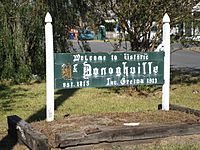 McDonogh, is a community of Algiers, New Orleans, Louisiana. McDonogh was previously known as McDonoghville. It was established in 1815, and named for major land owner John McDonogh.

McDonoghville stradled what is now the West Bank boundary between Jefferson Parish and Orleans Parish. The portion on the Orleans side was absorbed into Algiers and thence into New Orleans, while the portion on the Jefferson side was absorbed into Gretna in 1913. The original inhabitants of McDonoghville were free people of color to whom John McDonogh bestowed or rented the land. The current leaders of Gretna have ignored this part of the area's history largely due to the continuing corrosive residue of the JIm Crow past that caused a white washing of history. Among the original families of color were the Roches, Lombards, Carmouches, Millauds, Bordenaves, and Labostries. Irish, Italian and German immigrants were the first New Orleanians to populate McDonogh in the late 19th and early 20th centuries. The city's robust economic growth from trade increased population and immigrants fled to the West bank to relieve the increasingly crowded East bank. Excellent ferry service to the East bank's Faubourg St. Mary (now the CBD), Vieux Carre, and Marigny neighborhoods facilitated the growth of this neighborhood during this period.

Like many New Orleans neighborhoods, McDonogh has its share of corner stores and its playground, named McDonogh, in this residential area. There are two small cemeteries, the St. Bartholemew, founded in 1848, and St. Mary, founded in 1866, both maintained by the Church of the Holy Name of Mary. The Church's parish was founded in 1848 and the church built in 1929. One thing that makes this neighborhood unique is the levee that overlooks the Mississippi River. One of the largest commercial establishments that sits near the levee is Mardi Gras World. Started in 1947, this family business designs and builds carnival floats for Mardi Gras and massive fiberglass sculptures for businesses. During the 80s and 90s, it was known to have the highest amount of crime and drug activity while the other section in Gretna was safe.

All content from Kiddle encyclopedia articles (including the article images and facts) can be freely used under Attribution-ShareAlike license, unless stated otherwise. Cite this article:
McDonogh, Louisiana Facts for Kids. Kiddle Encyclopedia.