McNears Beach developed a fishing industry in the 1870s. The McNear post office operated from 1897 to 1910. The name comes from the McNear Family, former owners of the land. The McNear Brothers, E.B. and J.A., moved to the beach site about 1870 and built two houses (which have since been demolished), a stable, a warehouse, and a general store. 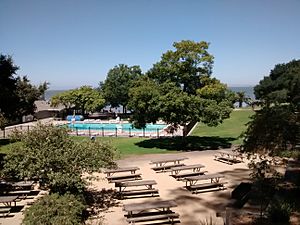 The swimming pool and a picnic area at McNears Beach Park

The McNear Brothers stable remains, and is now used as a Park Ranger Office operated by Marin County Department of Parks and Open Space.

China Camp State Park, adjacent to McNear Beach on the east, is a unit of the San Francisco Bay National Estuarine Research Reserve.

All content from Kiddle encyclopedia articles (including the article images and facts) can be freely used under Attribution-ShareAlike license, unless stated otherwise. Cite this article:
McNears Beach, California Facts for Kids. Kiddle Encyclopedia.