Melaleuca salicina, commonly known as willow bottlebrush, is a plant in the myrtle family Myrtaceae, and is endemic to eastern Australia. Some Australian state herbaria continue to use the name Callistemon salignus, a name that is accepted by the Australian Plant Census. It is a shrub or small tree with soft foliage, pink new growth, white papery bark and spikes of usually white or creamy bottlebrush flowers in spring.

Melaleuca salicina is a shrub or small tree growing to 15 m (50 ft) high with soft, pink new growth and white or grey papery bark. Its leaves are arranged alternately and are 38–144 mm (1–6 in) long, 5–16 mm (0.2–0.6 in) wide, more or less flat, narrow elliptic in shape and tapering towards both ends. There is a mid-vein, marginal veins and 9-29 distinct lateral veins. 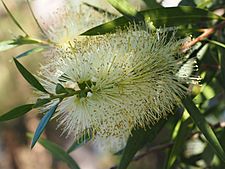 This bottlebrush species was first formally described in 1797 by James Edward Smith who gave it the name Metrosideros saligna in Transactions of the Linnean Society of London. Then, in 1826, Robert Sweet transferred to the genus Callistemon in his Hortus Britannicus. In 2006, Lyndley Craven transferred the species to Melaleuca as Melaleuca salicina, a name that is listed as a synonym of C. salignus by the Australian Plant Census. The specific epithet (salicina) refers to an apparent similarity between the leaves of this species and those of a species of willow in the genus Salix.

This melaleuca occurs in New South Wales from the border with Victoria along the coast and ranges to the Biloela and Bundaberg districts in Queensland. It grows along watercourses and coastal waterways and on river flats .

Melaleuca salicina has been known in gardens over many years, usually as Callistemon salignus. Under that synonym it has gained the Royal Horticultural Society's Award of Garden Merit. It can be used for providing shelter and screening and is well-suited as a street tree, or for planting in parks and gardens. Additionally, flowers will attract birds to a garden. The species is suited to a wide range of soil types, and can tolerate both wet and dry conditions and near-coastal exposure but it is not frost tolerant.

Pink and red forms are seen in cultivation.

All content from Kiddle encyclopedia articles (including the article images and facts) can be freely used under Attribution-ShareAlike license, unless stated otherwise. Cite this article:
Melaleuca salicina Facts for Kids. Kiddle Encyclopedia.