The flowers are bright yellow, and arranged in a spike or a head near the ends of branches. The heads are up to 15 mm (0.6 in) in diameter and contain 2 to 15 groups of flowers in threes. The stamens are arranged in five bundles around the flower, each bundle with 7 to 11 stamens. Flowering occurs from August to February but mainly in October and November. The fruit which follow are woody capsules 2.3–4 mm (0.09–0.2 in) long in clusters of about six which are about 10 mm (0.4 in) in diameter. The rim of the fruit are flat. 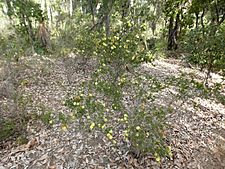 Melaleuca thymoides was first formally described in 1806 by the French biologist, Jacques Labillardière in Novae Hollandiae Plantarum Specimen. The specific epithet (thymoides) refers to the similarity of the foliage of this species with those of a species of Thymus in the Family Lamiaceae.

This melaleuca occurs in coastal areas in and between the Perth, Albany and Cape Arid districts in the Avon Wheatbelt, Esperance Plains, Jarrah Forest, Mallee, Swan Coastal Plain and Warren biogeographic regions. It grows in sand on granite hills and in areas that are flooded after rain.

Melaleuca thymoides is classified as "not threatened" by the Government of Western Australia Department of Parks and Wildlife.

All content from Kiddle encyclopedia articles (including the article images and facts) can be freely used under Attribution-ShareAlike license, unless stated otherwise. Cite this article:
Melaleuca thymoides Facts for Kids. Kiddle Encyclopedia.