Melaleuca williamsii is a plant in the myrtle family, Myrtaceae and is endemic to an area between north-eastern New South Wales and south eastern Queensland in Australia. (Some Australian state herbaria continue use the name Callistemon pungens.) It is a distinctive shrub with stiff branches, silvery new growth, prickly leaves and spikes of purple flowers in late spring. It is classified as a vulnerable species under the Australian Government Endangered Species Protection Act.

Melaleuca williamsii is a shrub growing to 2.5 m (8 ft) tall with rigid branches and new growth covered with soft, silky hairs giving a silvery appearance. Its leaves are arranged alternately and are 18–68 mm (0.7–3 in) long, 3–14 mm (0.1–0.6 in) wide, narrow elliptic to narrow egg-shaped and flat to half-moon shaped in cross section. They have a sharp tip 1–2 mm (0.04–0.08 in) long, a mid vein, indistinct lateral veins and oil glands visible on both surfaces. 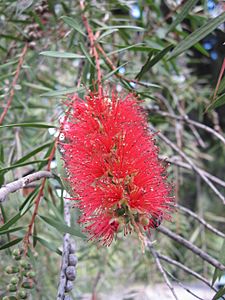 M. williamsii in the Royal Botanical Garden of Madrid 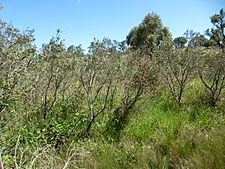 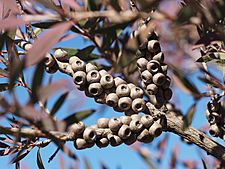 Melaleuca williamsii was first named in 2009 by Lyndley Craven in Novon when Callistemon pungens was transferred to the present genus. It had previously been known as Callistemon pungens, first formally described by Roger Spencer and Peter Lumley in 1990 in Muelleria, based on plant material collected from near Hillgrove. The specific epithet (williamsii) honours John Beaumont Williams, a botanist who was expert in the flora of the Northern Tablelands region of New South Wales.

Callistemon pungens is regarded as a synonym of Melaleuca williamsii by the Royal Botanic Gardens, Kew.

This melaleuca occurs in the higher altitude regions of north eastern New South Wales and south eastern Queensland. It grows in granite and trachyte rock crevices in forest and heath and on sandy or shallow rocky soil.

All content from Kiddle encyclopedia articles (including the article images and facts) can be freely used under Attribution-ShareAlike license, unless stated otherwise. Cite this article:
Melaleuca williamsii Facts for Kids. Kiddle Encyclopedia.