Melanitis leda, the common evening brown, is a common species of butterfly found flying at dusk. The flight of this species is erratic. They are found in Africa, South Asia and South-east Asia extending to parts of Australia. 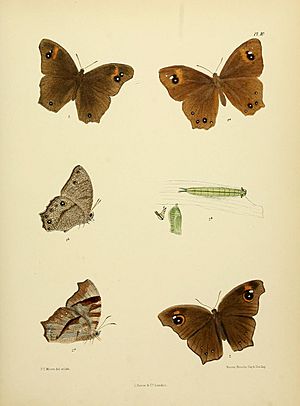 Underside paler, densely covered with transverse dark brown striae; a discal curved dark brown narrow band on forewing; a post-discal similar oblique band, followed by a series of ocelli: four on the forewing, that in interspace 8 the largest; six on the hindwing, the apical and subtornal the largest.

Dry-season form: Forewing: apex obtuse and more or less falcate; termen posterior to falcation straight or sinuous. Upperside: ground colour similar to that in the wet-season form, the markings, especially the ferruginous lunules inwardly bordering the black sub-apical spots on forewing, larger, more extended below and above the black costa. Hindwing: the ocellus in interspace 2 absent, posteriorly replaced by three or four minute white subterminal spots.

Underside varies in colour greatly. Antennae, head, thorax and abdomen in both seasonal forms brown or greyish brown: the antennae annulated with white, ochraceous at apex.

Resident butterflies are known to fight off visitors to the area during dusk hours. This chase behaviour is elicited even by pebbles thrown nearby.

All content from Kiddle encyclopedia articles (including the article images and facts) can be freely used under Attribution-ShareAlike license, unless stated otherwise. Cite this article:
Melanitis leda Facts for Kids. Kiddle Encyclopedia.