Melanthera micrantha (formerly Lipochaeta micrantha), known by the common name Kauai nehe, is a rare species of flowering plant in the aster family.

The plant is endemic to Hawaii, where it is known only from the island of Kauai.

It grows on slopes and in gulches in forested habitat. There are seven populations for a total of fewer than 1100 individuals.

It produces daisylike yellow flower heads on long stems. They are less than 0.5 inches (1.3 cm) in diameter

It is federally listed as an endangered species of the United States. The main threat to the species is the loss and degradation of its habitat caused by feral ungulates and non-native plants. 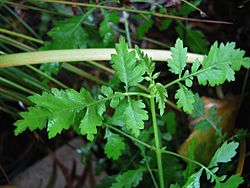 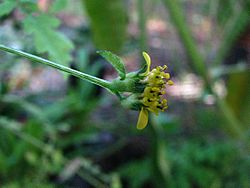 Close up of flower. 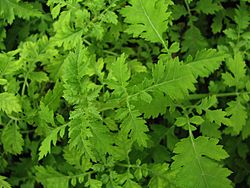 All content from Kiddle encyclopedia articles (including the article images and facts) can be freely used under Attribution-ShareAlike license, unless stated otherwise. Cite this article:
Melanthera micrantha Facts for Kids. Kiddle Encyclopedia.