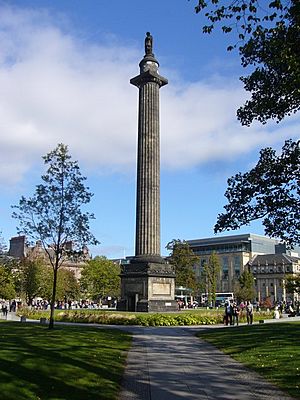 The Melville Column at St Andrew Square, Edinburgh, erected in 1821

The Melville Monument is a 150-foot high monumental column. One of the most prominent memorials in Edinburgh, it commemorates Henry Dundas, 1st Viscount Melville, whose statue surmounts the column.

The Category A listed column dominates St Andrew Square, in the heart of the New Town which Dundas helped to establish. It was erected in 1821, 14 years after his death. The architect was William Burn. The statue was added in 1828. The plaque at the base of the statue says the monument was paid for by officers and men of the Royal Navy.

In 2008 the Melville Monument was restored as part of the Twelve Monuments Project, a joint initiative of Edinburgh World Heritage and the City of Edinburgh Council.

Jack Docherty's short story "Statuesque", centred on this statue, was broadcast by BBC Radio 4 on 28 June 2020 in its Short Works series of stories inspired by current events.

All content from Kiddle encyclopedia articles (including the article images and facts) can be freely used under Attribution-ShareAlike license, unless stated otherwise. Cite this article:
Melville Monument, Edinburgh Facts for Kids. Kiddle Encyclopedia.